a revival of “Zarathustra”

“Zarathustra” is revised for the third time. It is a joyous and strange encounter. My wandering still has not reached its end... however, everything is already reoccurring, always en-route.

At seventeen, I was a “staggering Nietzsche.” I was also a “staggering, intoxicated Rambo.” It is not clear whether it was “A Season in Hell," or “Zarathustra” first. At any rate, they were drunk and had me feel giddy inside. It was not me... They trembled, and they were who made me dance. ...That was what Nietzsche said. “There is no life in a day in which you do not dance even once,” “Dance while doing a headstand."

Artaud continued with “Thinking pig, cut off the thinking of pigs.” I am the pig. I cut off the heads of pigs. My Japanese is disarrayed, stammering, and I stop speaking. Day after day, I slaughter my pig, and roll it... Pig-rolling! Pig tunnel! I went to and from the mountains and the discotheque.

Go outside, step over my corpse and go--so Nietzsche murmured into my “little ear.” It was the "temptation of the outside" that resounded from within my intoxicated self. It was a “little Ariadone” of the labyrinth of solitude that I go in. “Nietzsche, KIMYO!(strange!)” was my original motive for dance and had become the theme.

So a few years later, when I, already inside the labyrinth of dance, gave my encounter with a dancer (who was Carlotta Ikeda) the name “Ariadone no Kai,” it could be called my “Nietzsche, KIMYO! Encore.” It was to drill a hole into another labyrinth, into which I was  further to step and go within the labyrinth.

Along with “Zarathustra,” I must shout back “KIMYO” in Japanese with utmost gratitude to Nietzsche. Although it has the definition of “strange,” it is an utterance that lies beyond the loss of words and silence. It is a “Bravo” towards life.

It (KIMYO) is the aesthetics that bring  “laughter and affirmation” to the absurd and eerie truth of our life that is short-lived and filled with wounds. It is the voice emitting a voice that has lost its voice, the “sign” of words that has suppressed its words.

The first Tokyo performance of “Zarathustra” was “Z/A ZARATHUSTRA1980” (Sogetsu Hall) in 1980. With Carlotta Ikeda, I watched a video of this at her studio in Bordeaux. On the dark screen, appearing along with the dancers in the first performance were two men from France and a woman from Germany. A huge iron Minotaur enters, and the two men from France come up from the guest seating and cut off the neck with a single stroke of an axe. From the iron Minotaur were Nijinsky's Pan, born one after another. Hey! Ariadone, you larva!

It was an experiment of a different style, separate from the work that was revised later, that I called “Lotus Cabaret” at the time. But most settings and choreography prototypes were roughly there.

The men from this time, Bernard who practiced Japanese archery and Frank who practiced aikido, were from Toulouse and acted as the go-between for the France performance two years after. Both were already experts.

Like a few other dancers for whom it was the first performance, the whereabouts of the woman from Germany, Bridget, are unknown; however, surely, she and the others are continuing to dance. It is not as if dance lies within dance. Dance is born when we make a hole to the outside in our life. Dance is to speak of the difficulty and simplicity in “leaping” outside of the syntax that is dance that everyone agreed on...

The first France performance was at the Sigma Festival, Bordeaux, in 1981. At the time, a woman who watched “Zarathustra” for the second time proposed this time's showing. Marie Claude (bai) from Danse Tendances. She said, “Z decided my life for me...” Another Ariadne! She persuaded Carlotta Ikeda and myself in private, and made another showing that was like a miracle happen. Together with Carlotta, I express my thanks.

Now, Ariadne submerges herself in the ocean. She dissolves infinitely into the beach. However, Ariadone comes back. Death by drowning is the turning point of her fate. Deleuze writes, “Ariadone hangs herself. Ariadone wishes to perish”... From Theseus to Dionysus. From Dionysus' affirmation, Ariadne returns her affirmation.
Affirmation become a reduplicated affirmation.

The scene where Carlotta dances "Sils Maria" in a red dress is a dance of return towards affirmation. However, the rhythm of the return of the dance is brought about in the middle of the crack that was opened through the "severing of fate." Like our lives, pain and the mending from it are method​s of dance and happiness. That is the light and darkness of our ripped bodies, mirrors reflecting one another and migrating numerous times.

Ariadone smashed her body. We throw our bodies into the earth once again, repeatedly. And a new map is born in our bodies. It is like cutting a stagnant flow, like a customary death, like cutting the continuous flow of life, and putting out a new becoming of continuity and a new rhythm of transition from that crack.

Here, as if to intentionally disturb our different cultural territory, cultural and legendary images and ideas are used abundantly, transversely. Moreover, Japanese designs are to expose the gap between itself and things that are European. For example, Japanese court music has already been transformed by Osamu Goto's music, and Japanese dancers are blocked from the nostalgia towards traditional things. And so, our bodies must go out and beyond exoticism, towards the horizon of severance, towards the new "experience of a strange land." We are that mixed rhythm.

This is a spectacle based on Nietzsche’s monstrous text―something that Murobushi fell in love with and read meticulously, repeatedly referring to it, admiring it, being fascinated and intoxicated by it, and writing about it. Ariadone no kai, which had previously been choreographed jointly by the male dancers of Dairakudakan, was now completely in the hands of Murobushi alone. According to Murobushi's greeting card, this work is "both an experimental and adventurous Butoh musical and a genuine avant-garde Butoh.” “A stairway from the 20th century to the 21th century; going back 100 years, 1000 years, and engraving Nietzche’s dance philosophy book <Also sprach Zarathustra> into Butoh.” “Nietzsche: Zarathustra was a fierce love letter to the East hypothesized by Zoroaster-Duonisos. The reciprocal exchange of love letters to Western culture in modern Japan had many consequences and fruitions at the end of this century. It must have been the first attempt to do so.” And what the audience saw was a huge, leaden monolith that moved freely, a midair ride ("The Midgard Serpent”; scene titles in brackets hereafter), a flood of wheeled objects ("Ring der Ringe"), a large amount of coke pouring down ("Palace of Dreams"), a spray of blood (actually red chalk dust) when the head of a fake giant bull (Minotaur) is cut off, women in Nijinsky's heraldic garb tumbling out of a hole in the severed head (Cow Noon) with the Indian tabla, laughing witches (Witch Season), etc. ... There are many things (objects) with a strong sense of existence that go beyond the boundaries of props. From gagaku (traditional Japanese court music) to Xenakis' tape work, Brian Eno, Pink Floyd, the Flying Lizards' kitschy remake of the Brecht Song, T. Rex's Cosmic Dancer, the Pointer Sisters, Keith Jarrett's piano solo, the sound of bells, and even Satie in the finale, Gymnopédie (orchestrated by Debussy), etc.―it is a glittering mosaic of sounds from all over the world. A daring choreography that is not afraid of vulgarity and turns invisible texts into visible ones.” A large baroque work that looks like a toy box turned upside down. The fact that all of Murobushi's connections were mobilized, from advertising materials to props, is another reason why this is a major work. The sheer complexity and volume of the devices made the stage preparation extremely complicated, but I will always remember the masterful behind-the-scenes direction of Ushio Amagatsu, who, with the members of Sankai Juku in tow, kept a sharp eye on the entire production and the details.(Y.O) 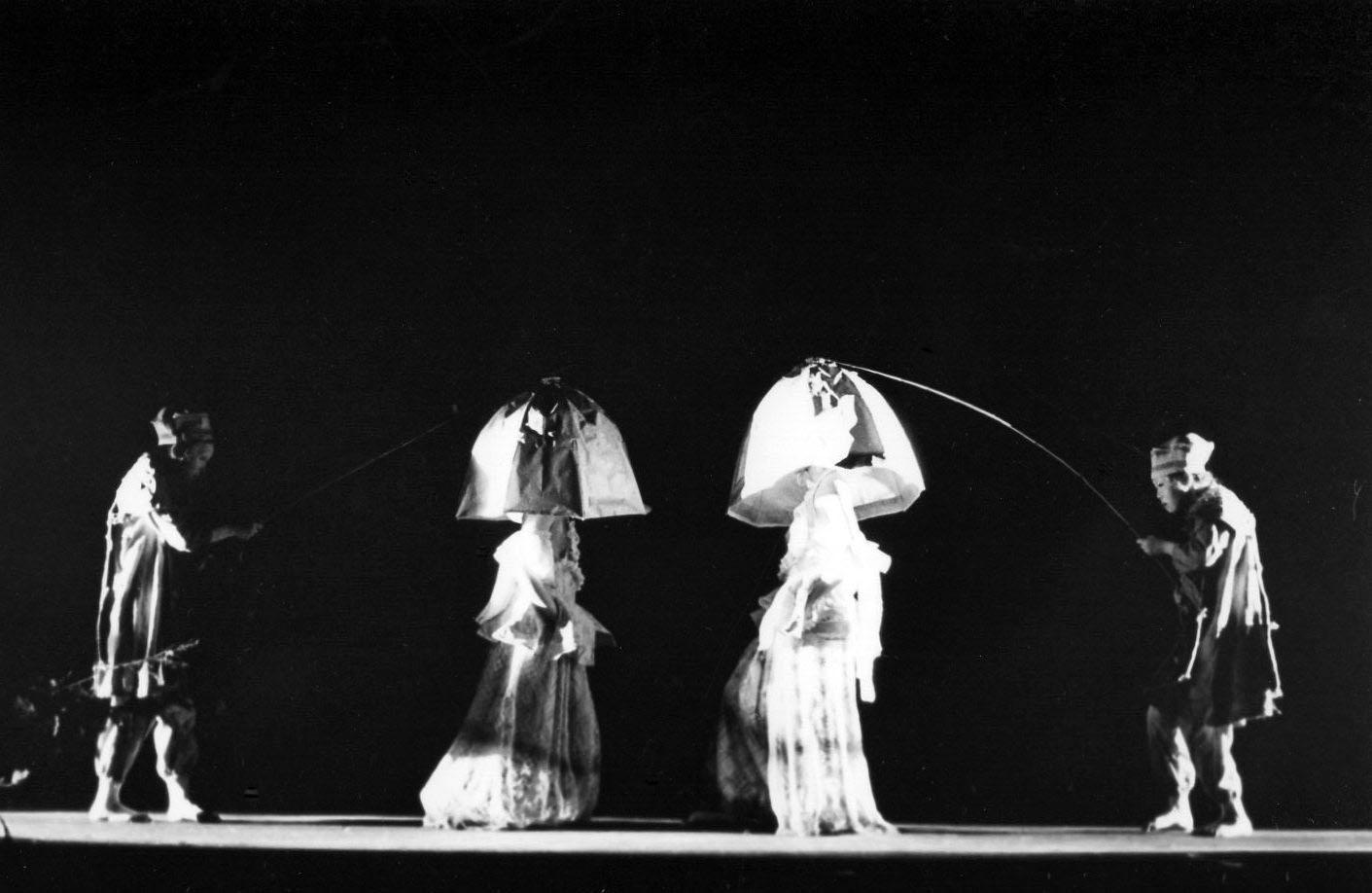 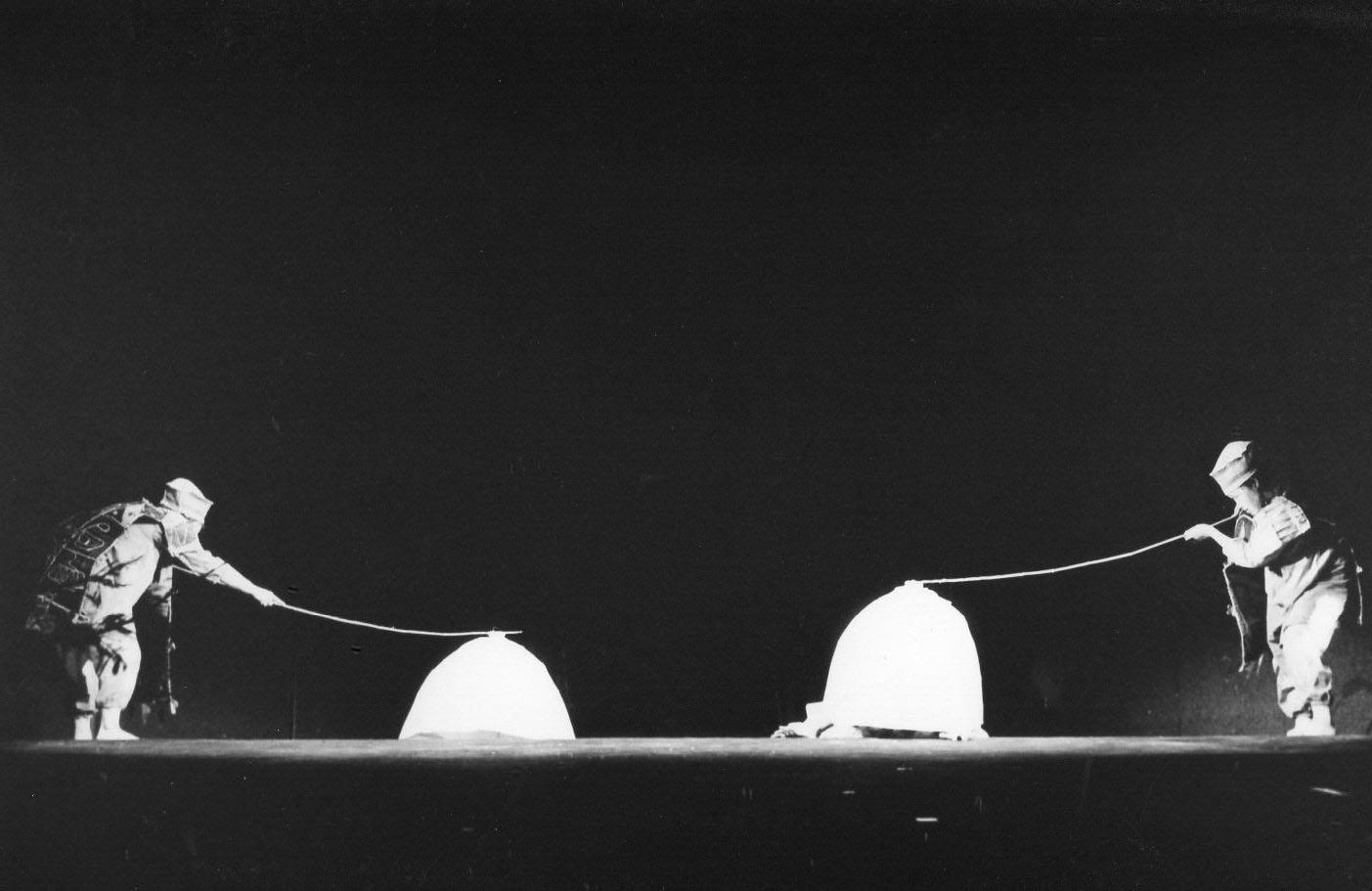 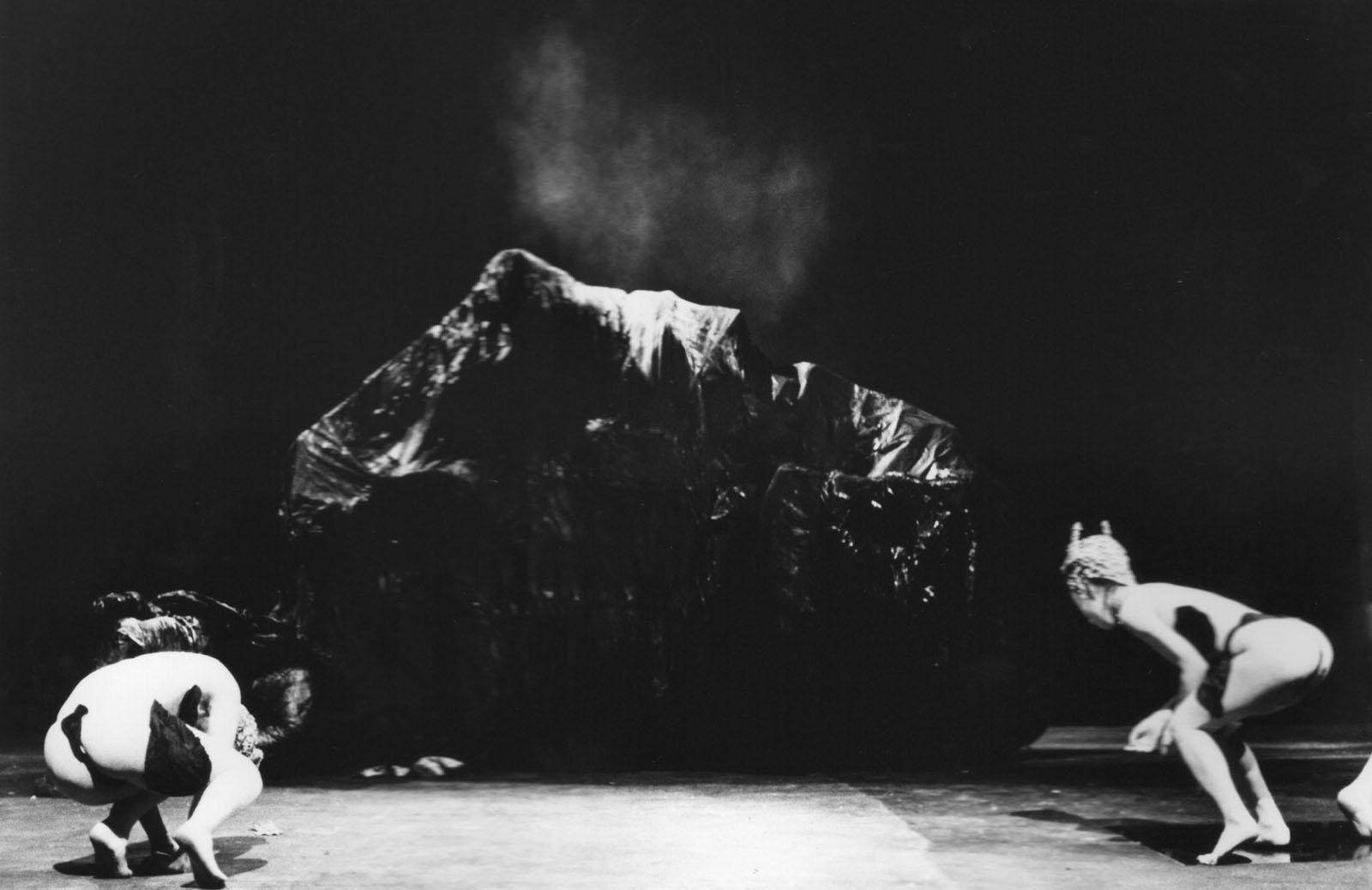 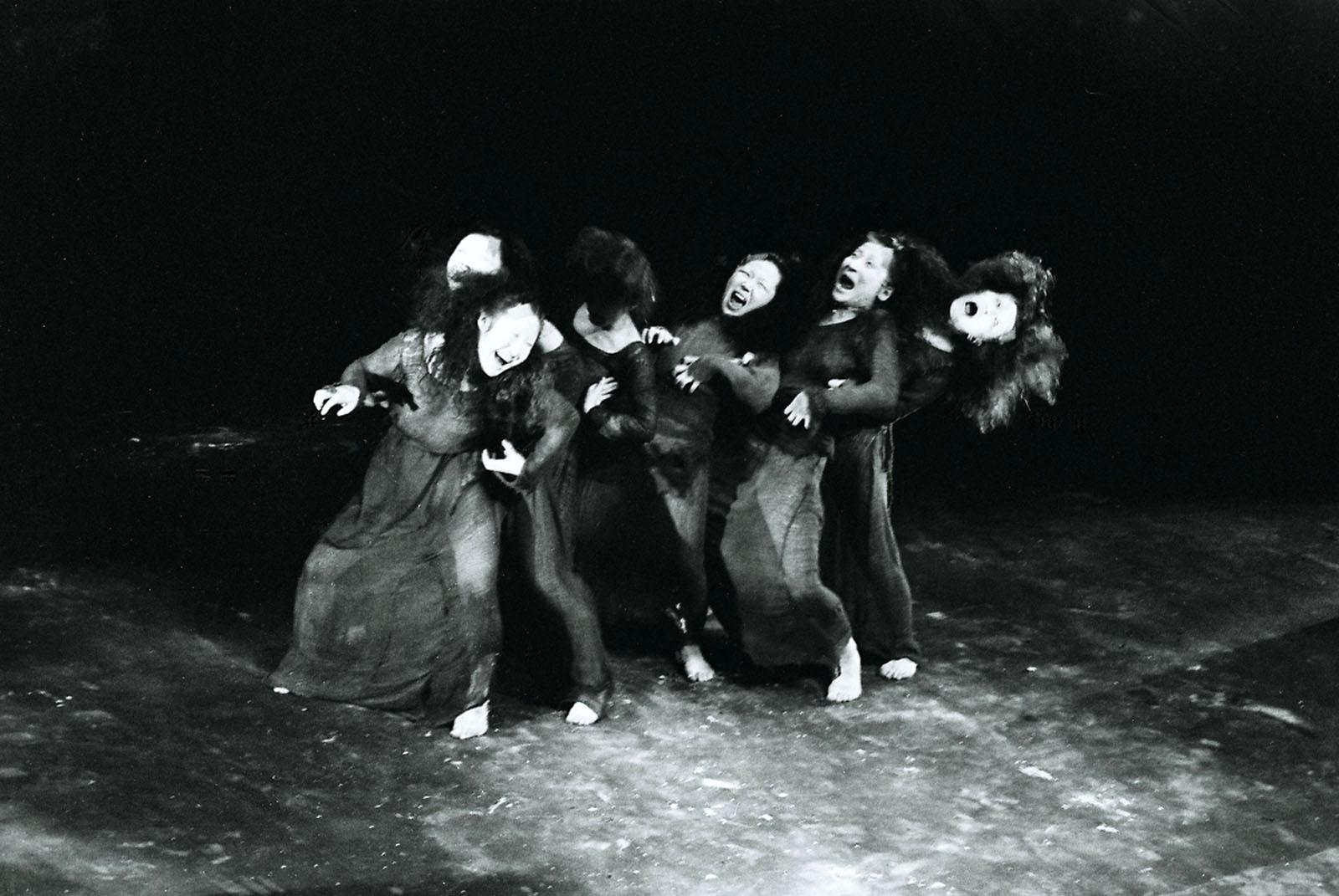 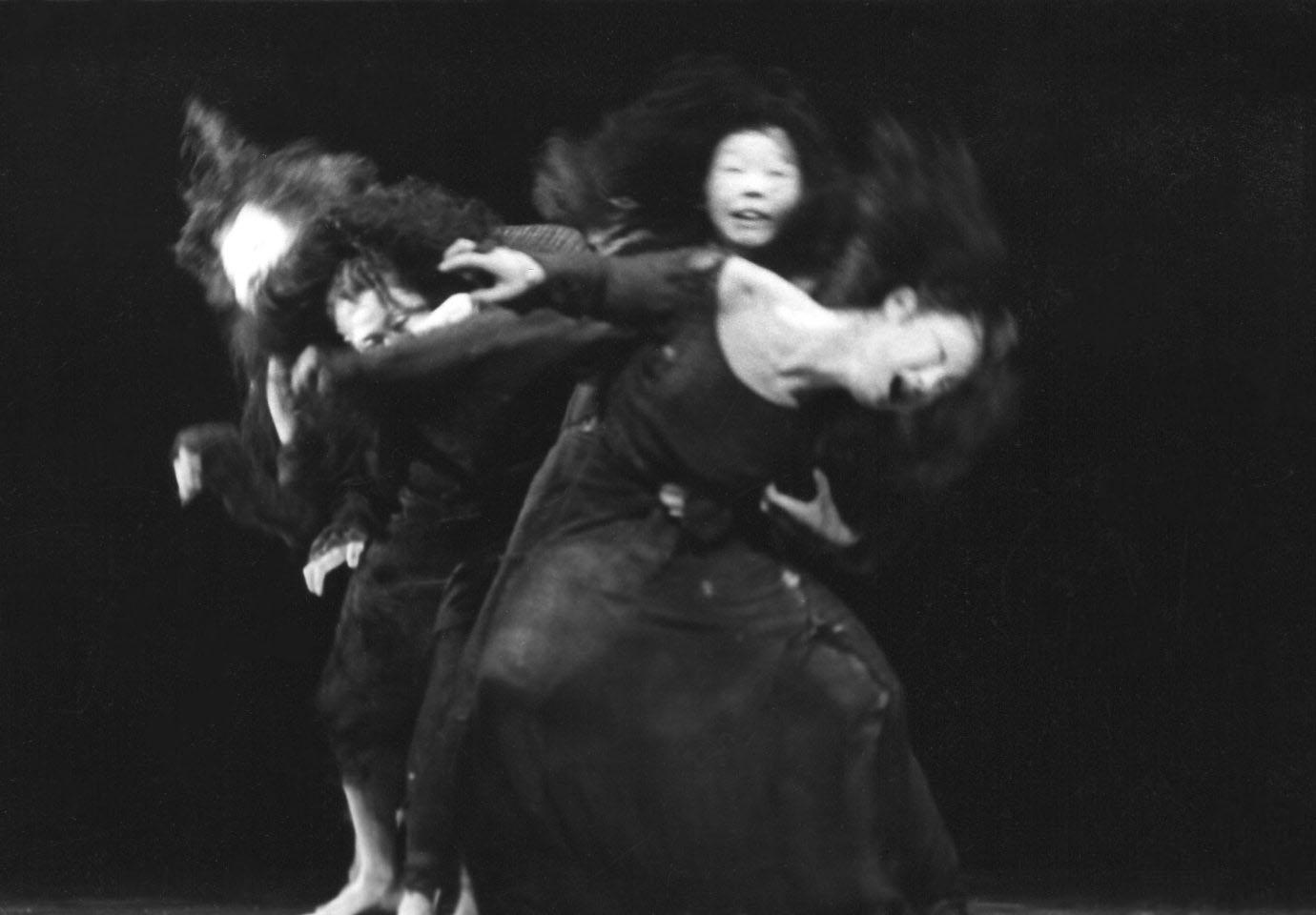 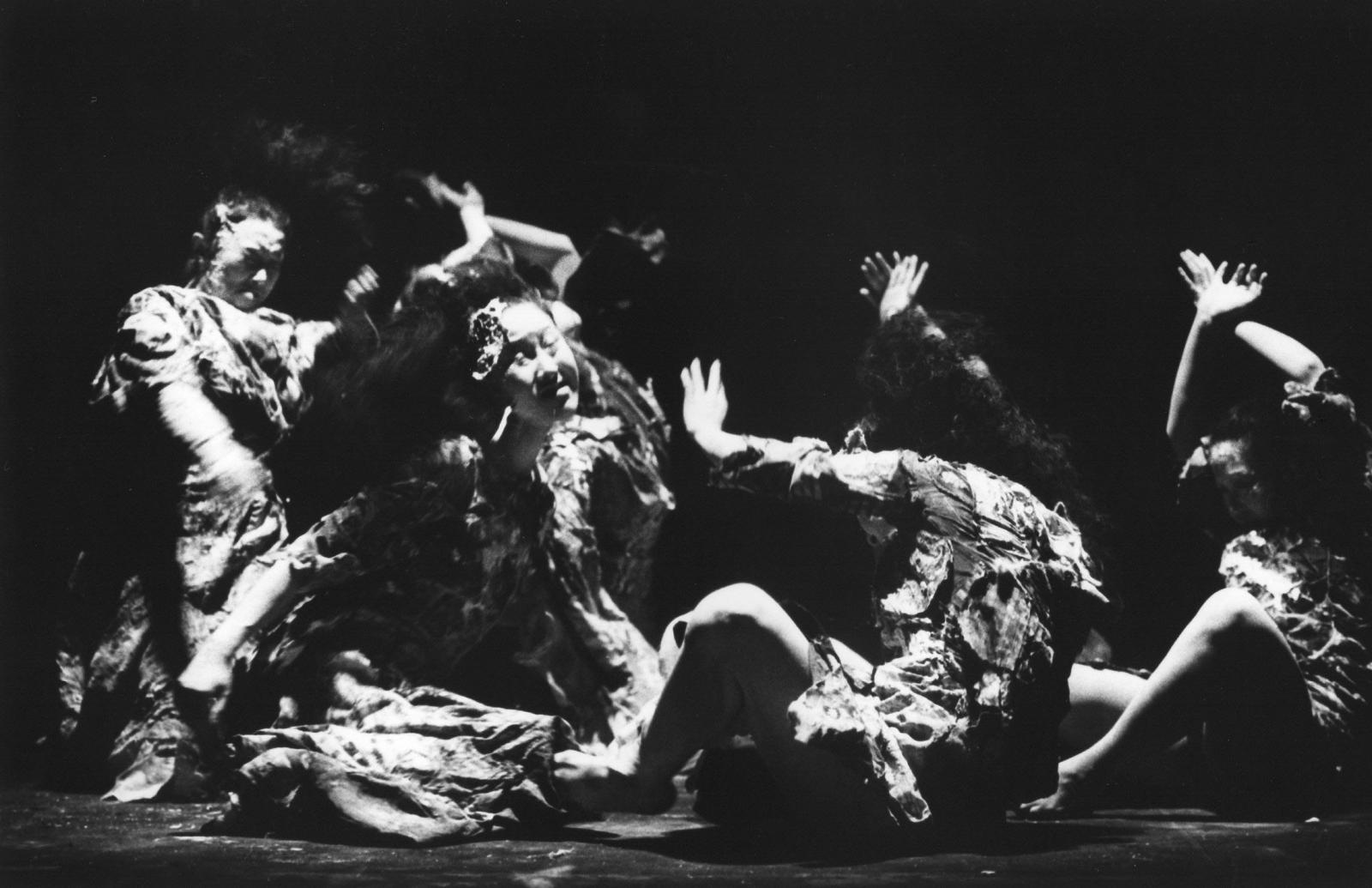 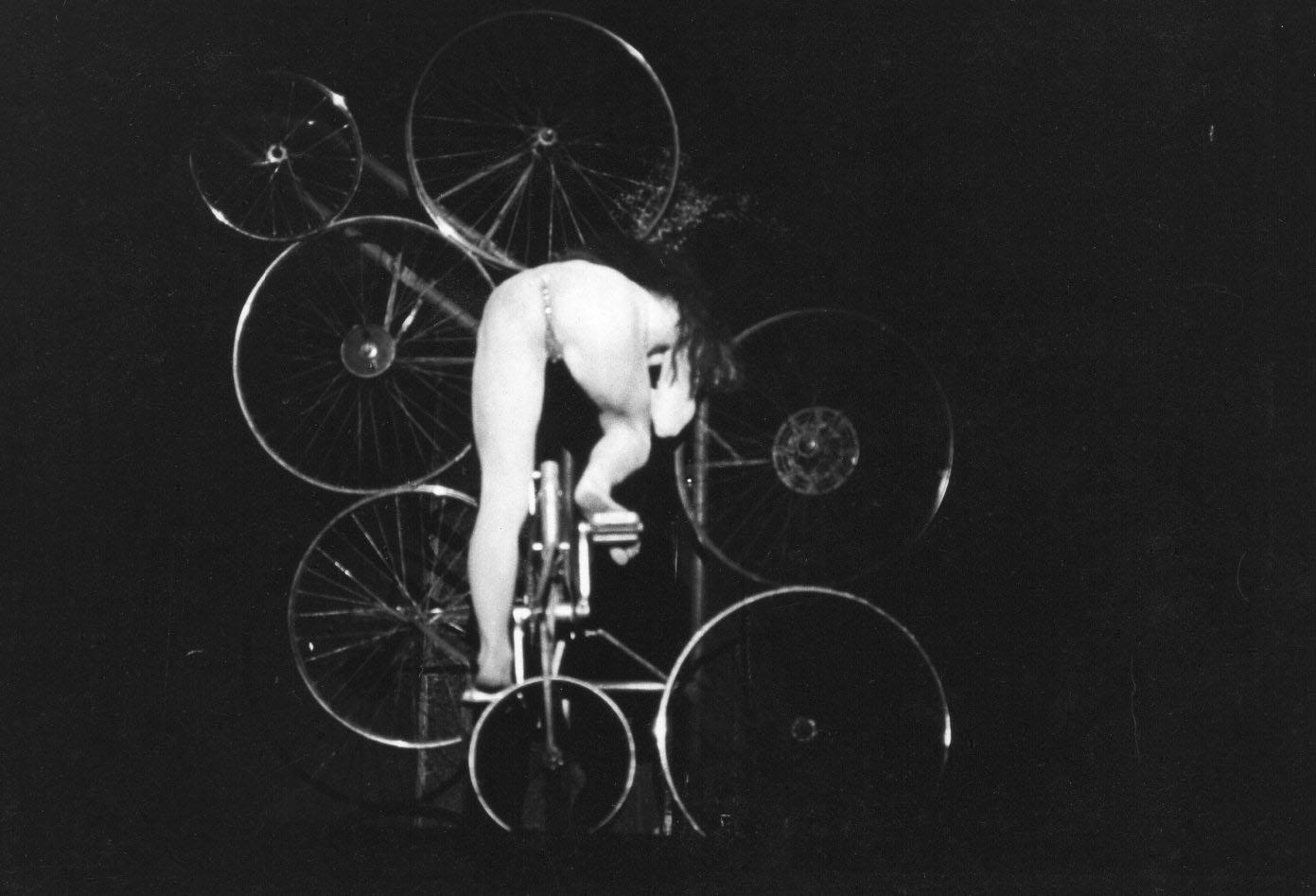 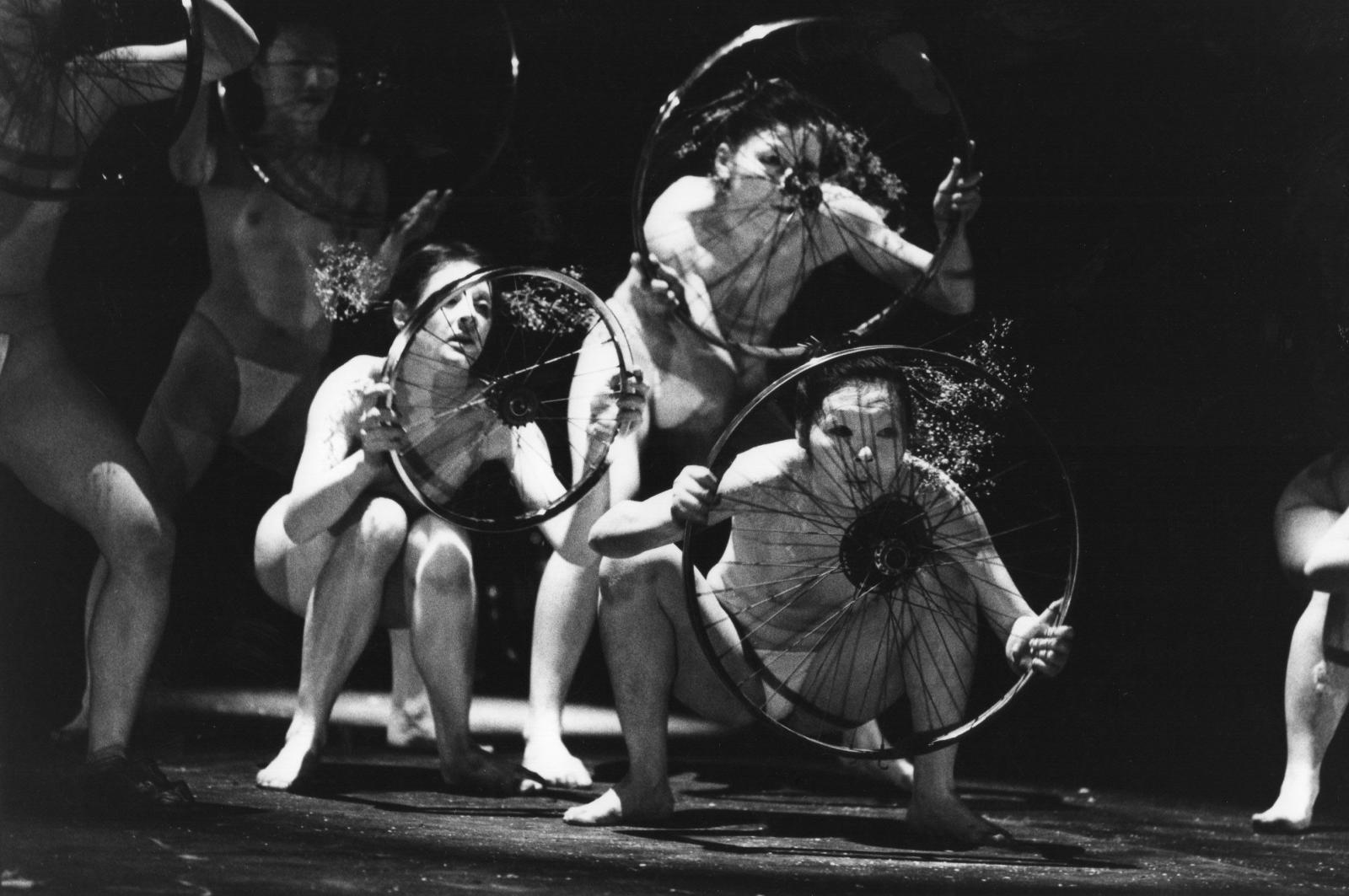 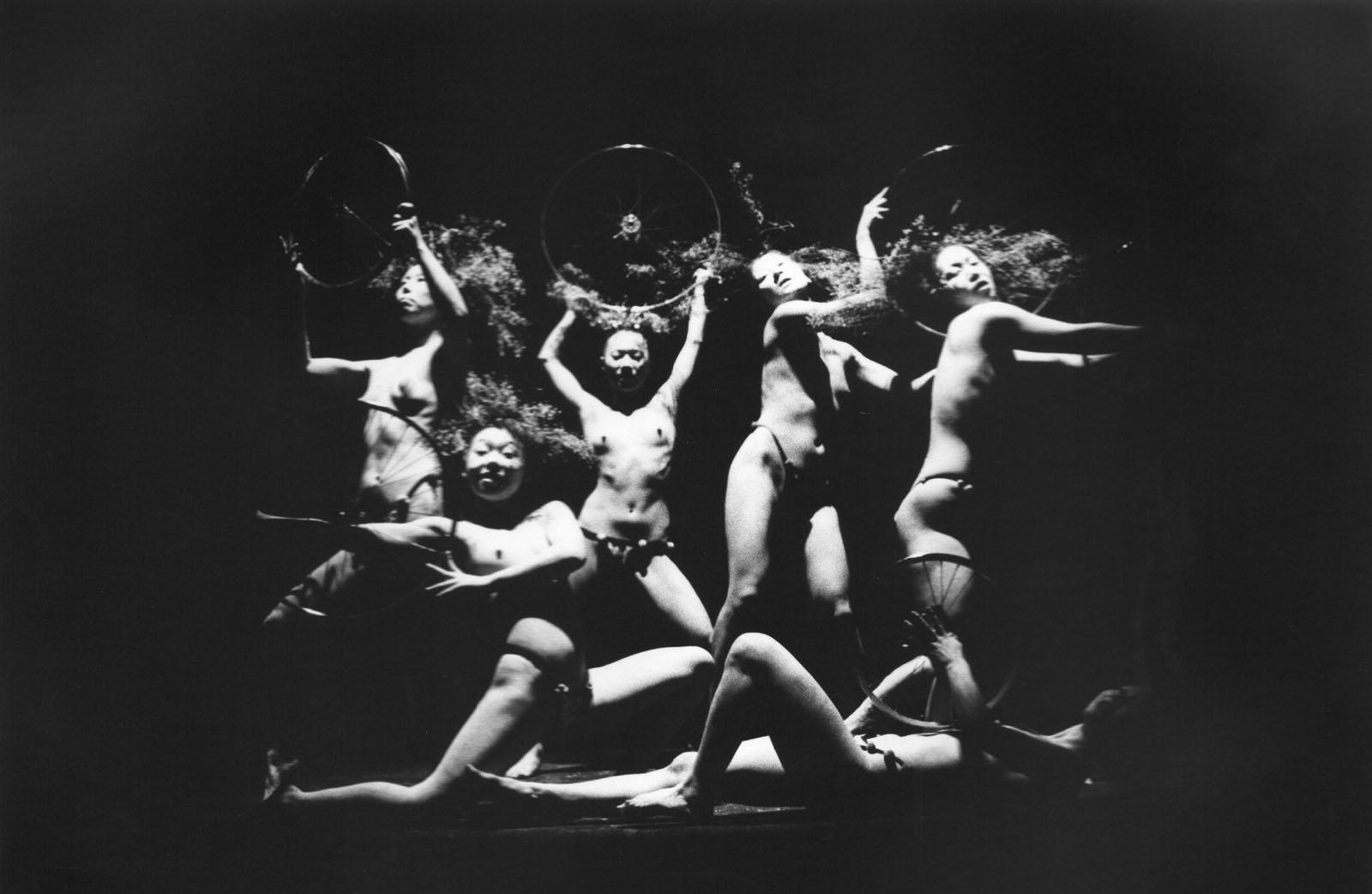 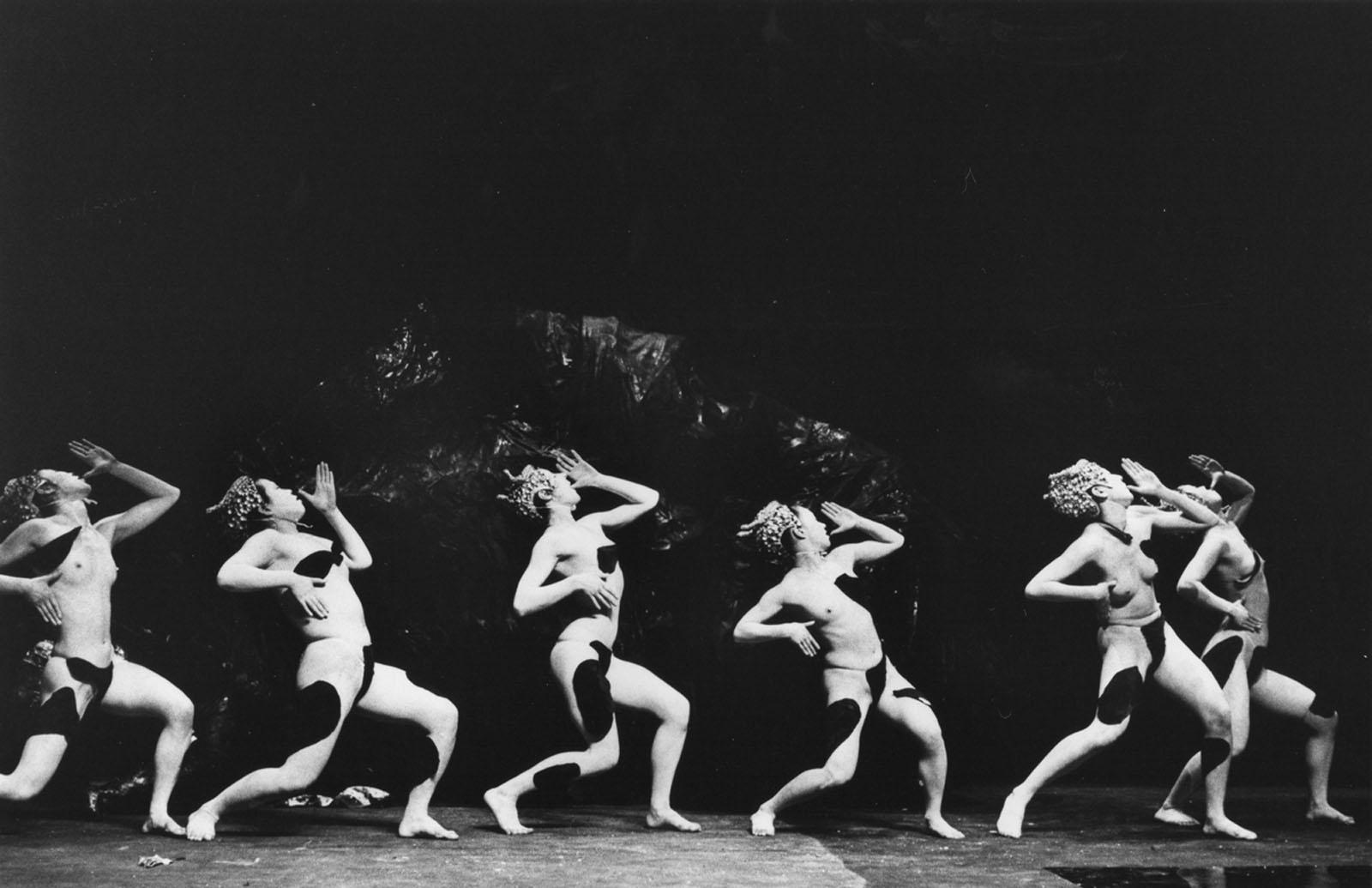 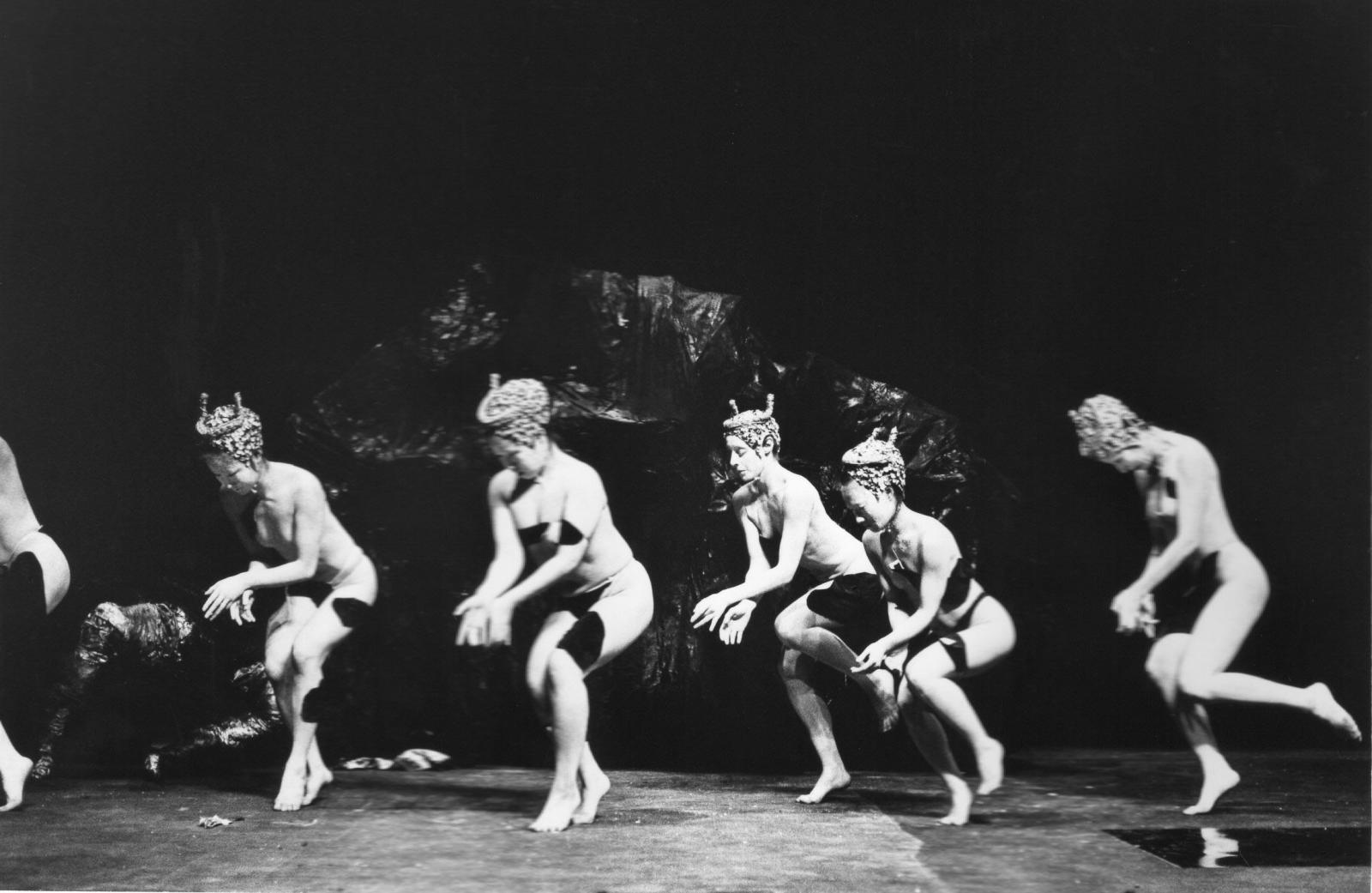 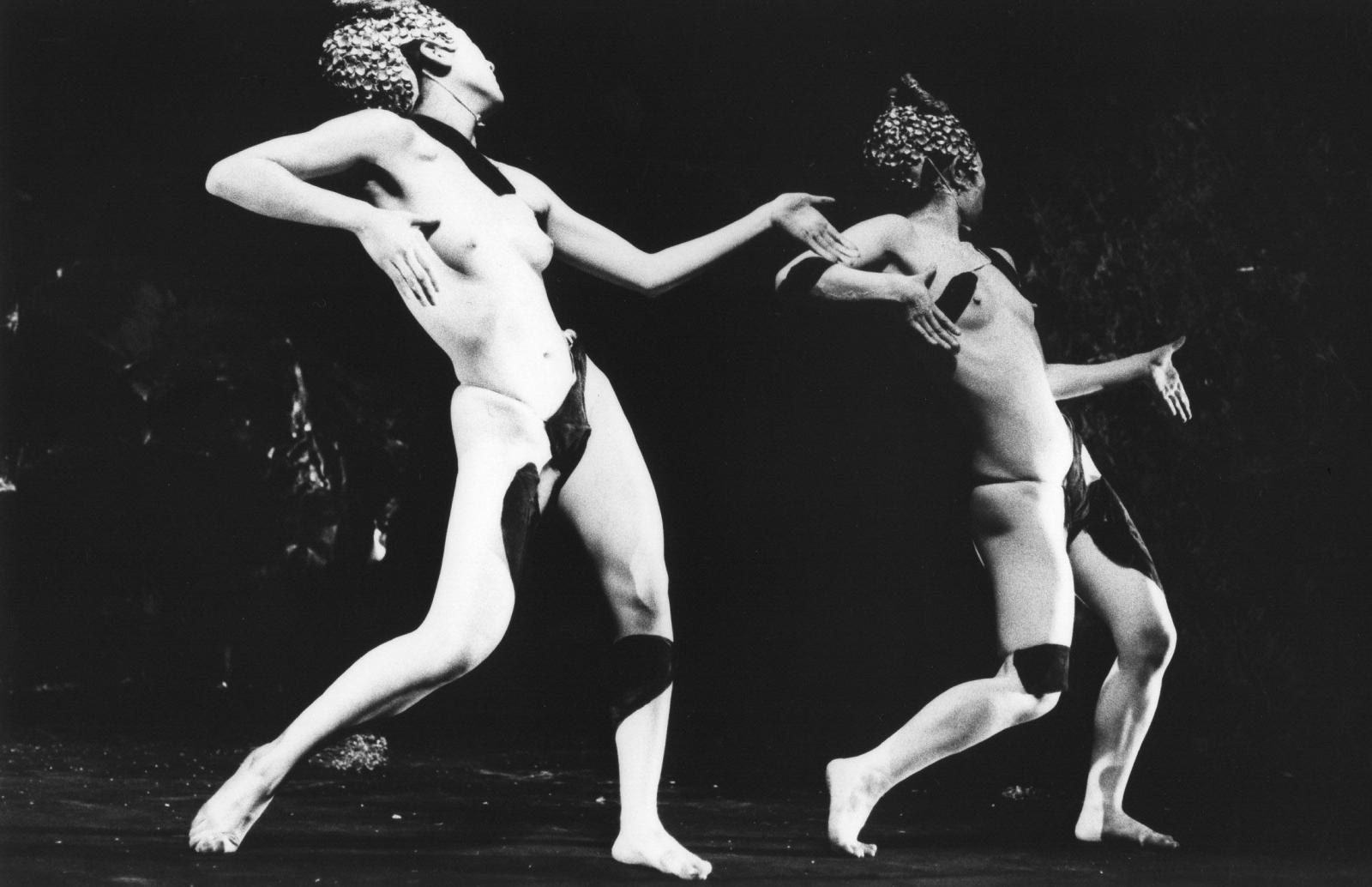 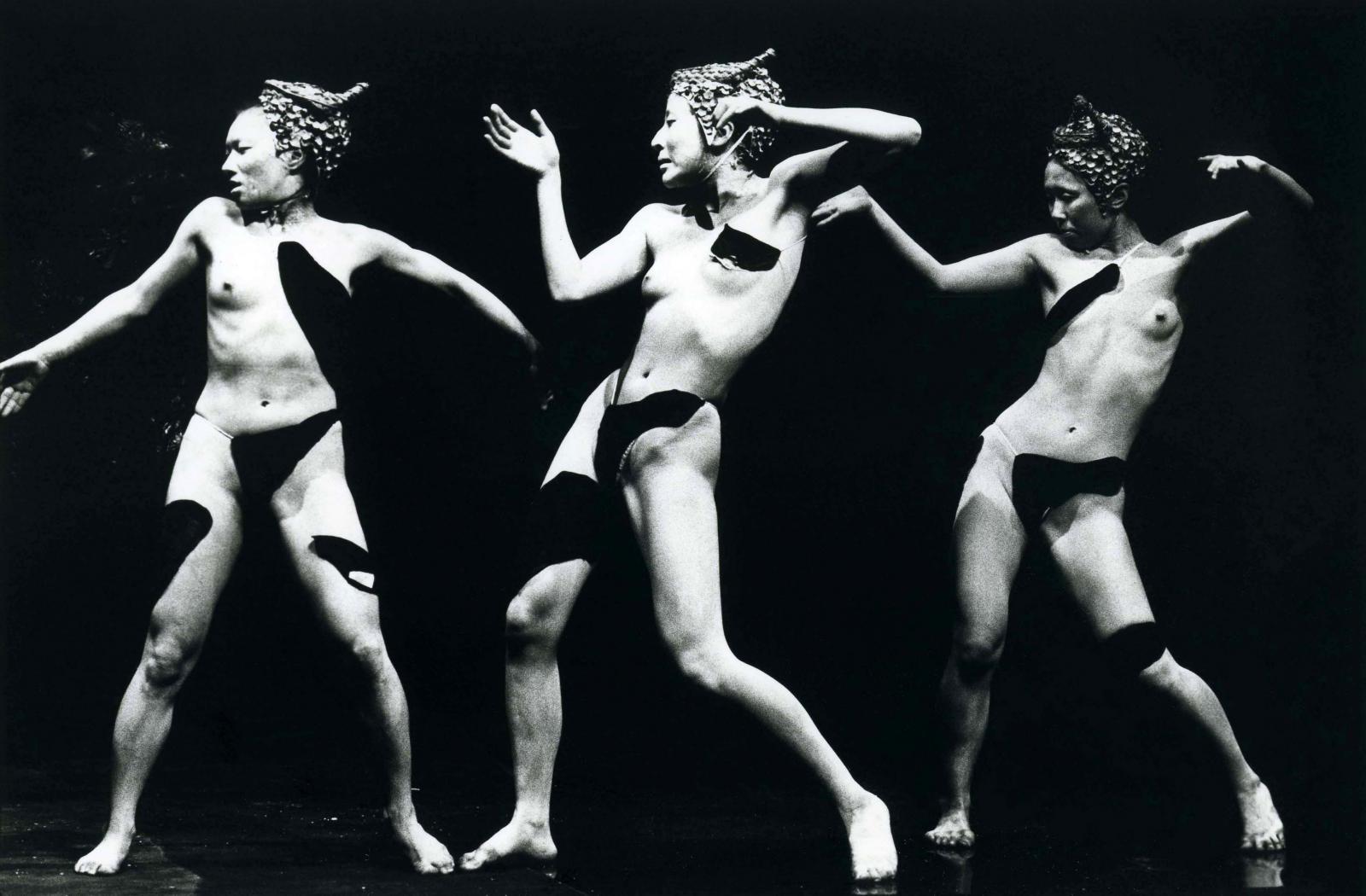 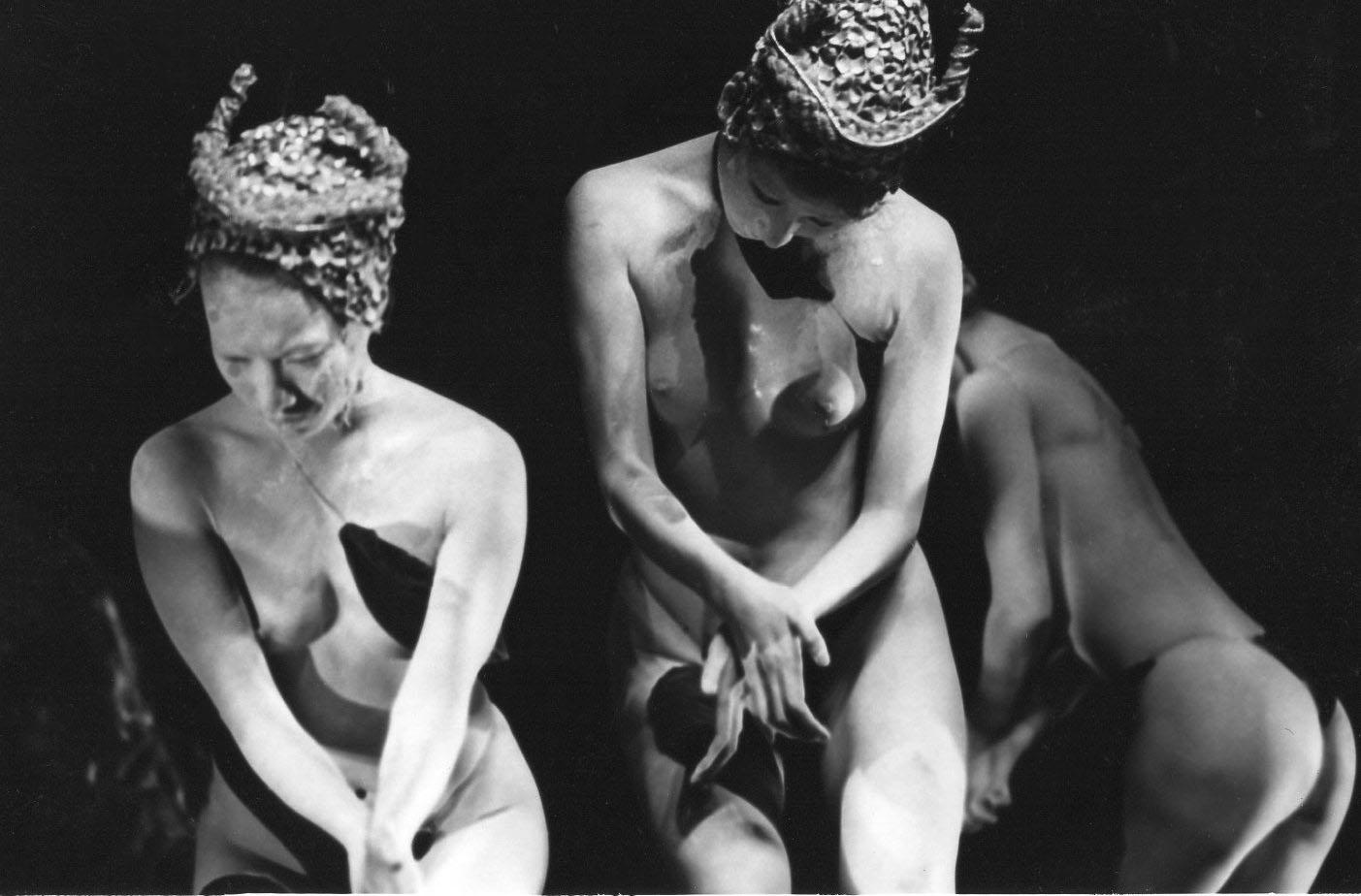 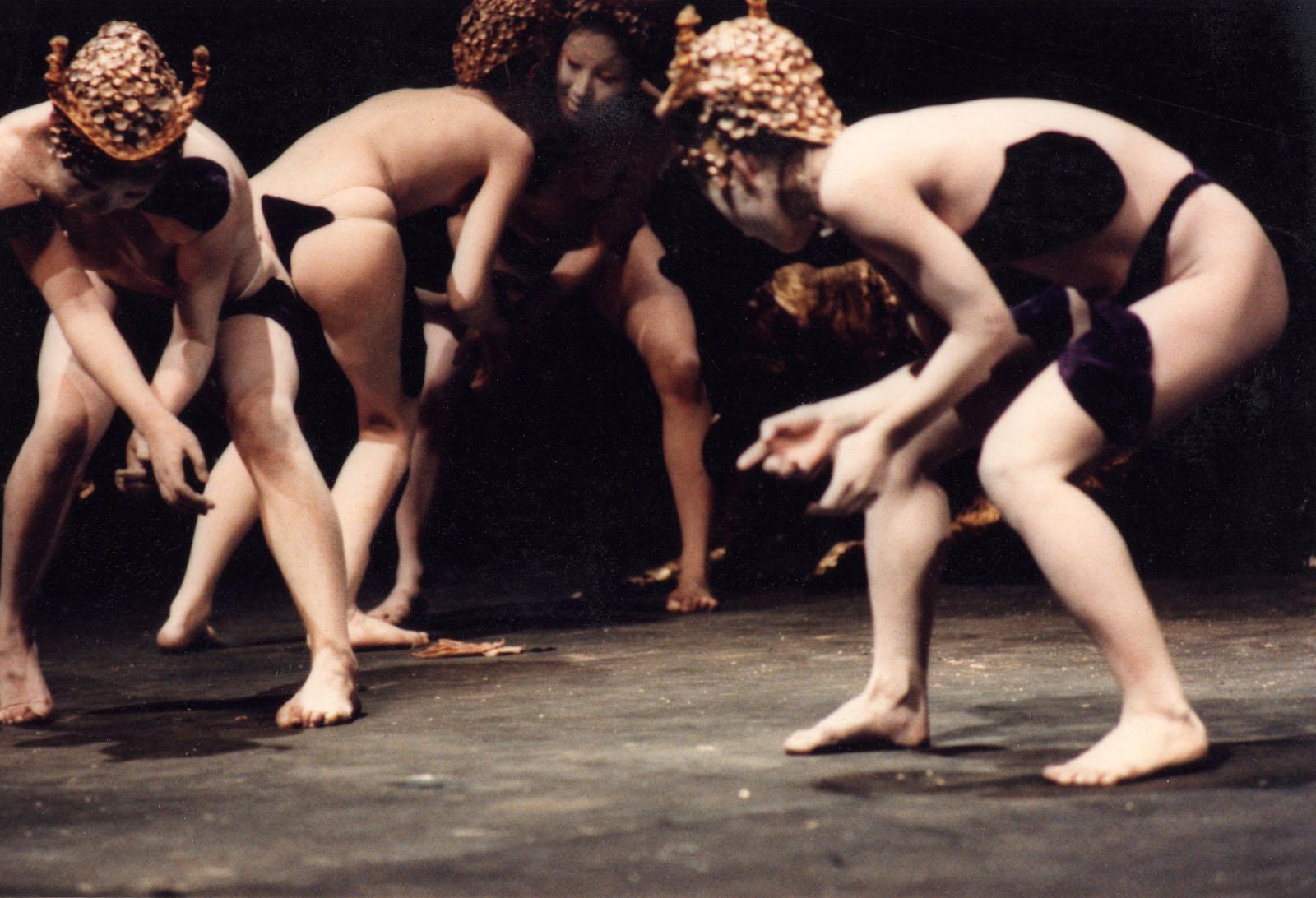 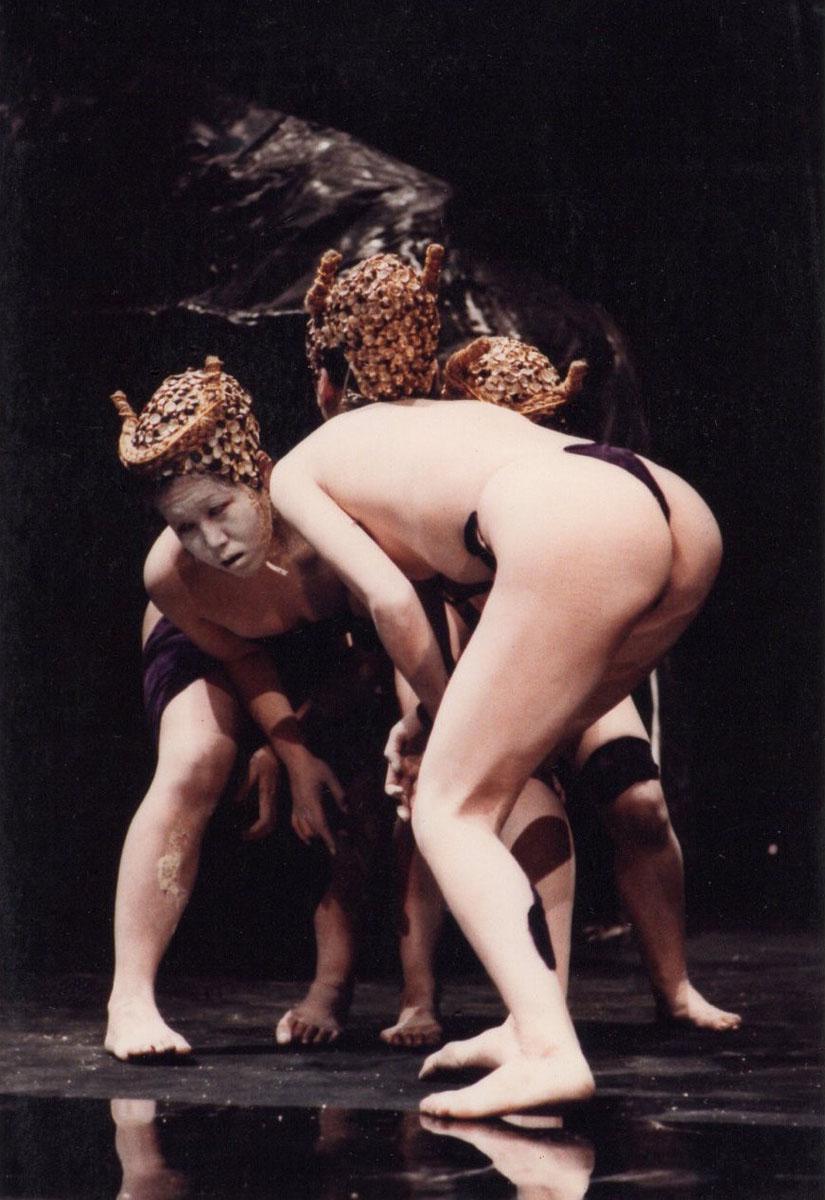 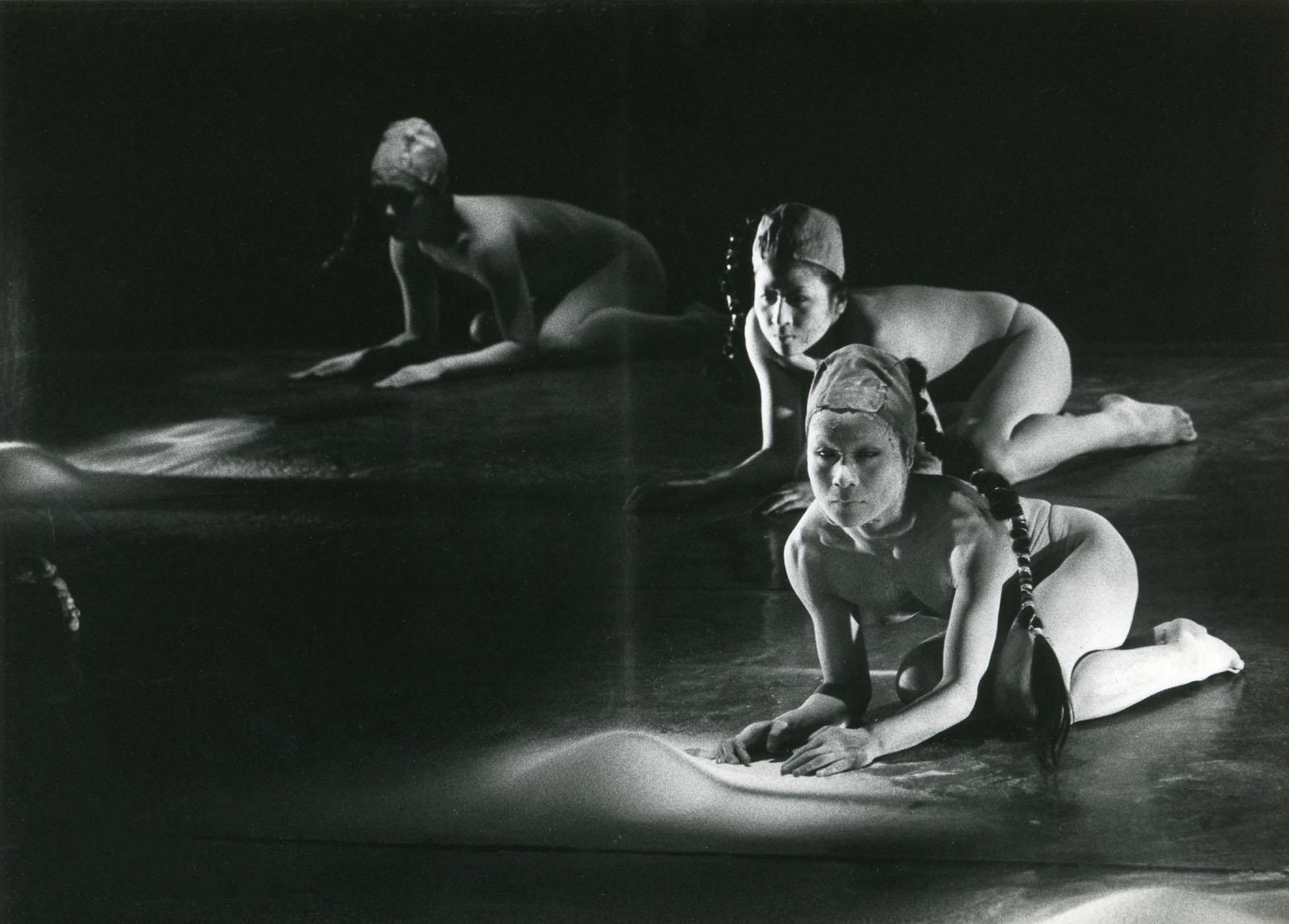 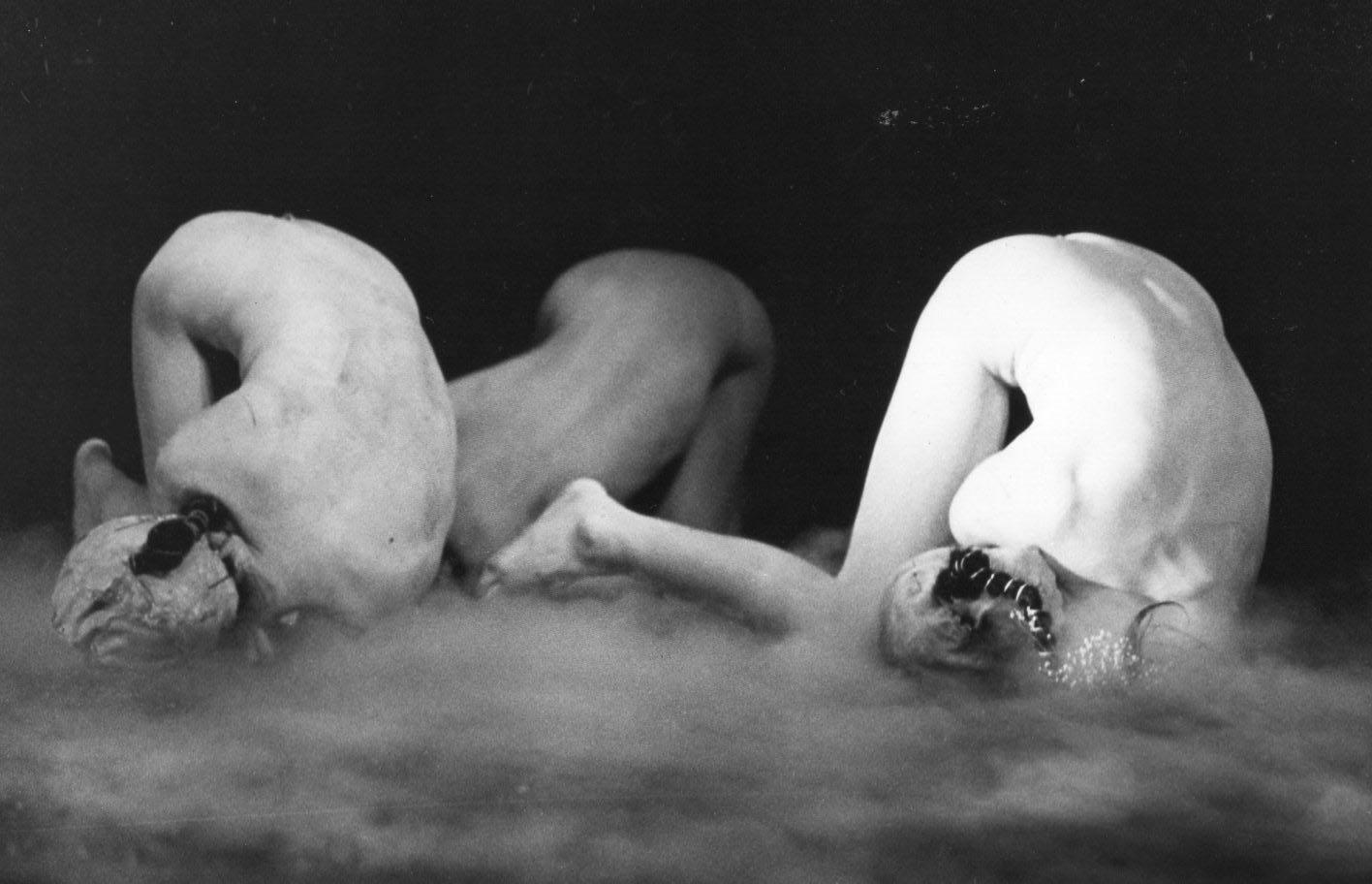 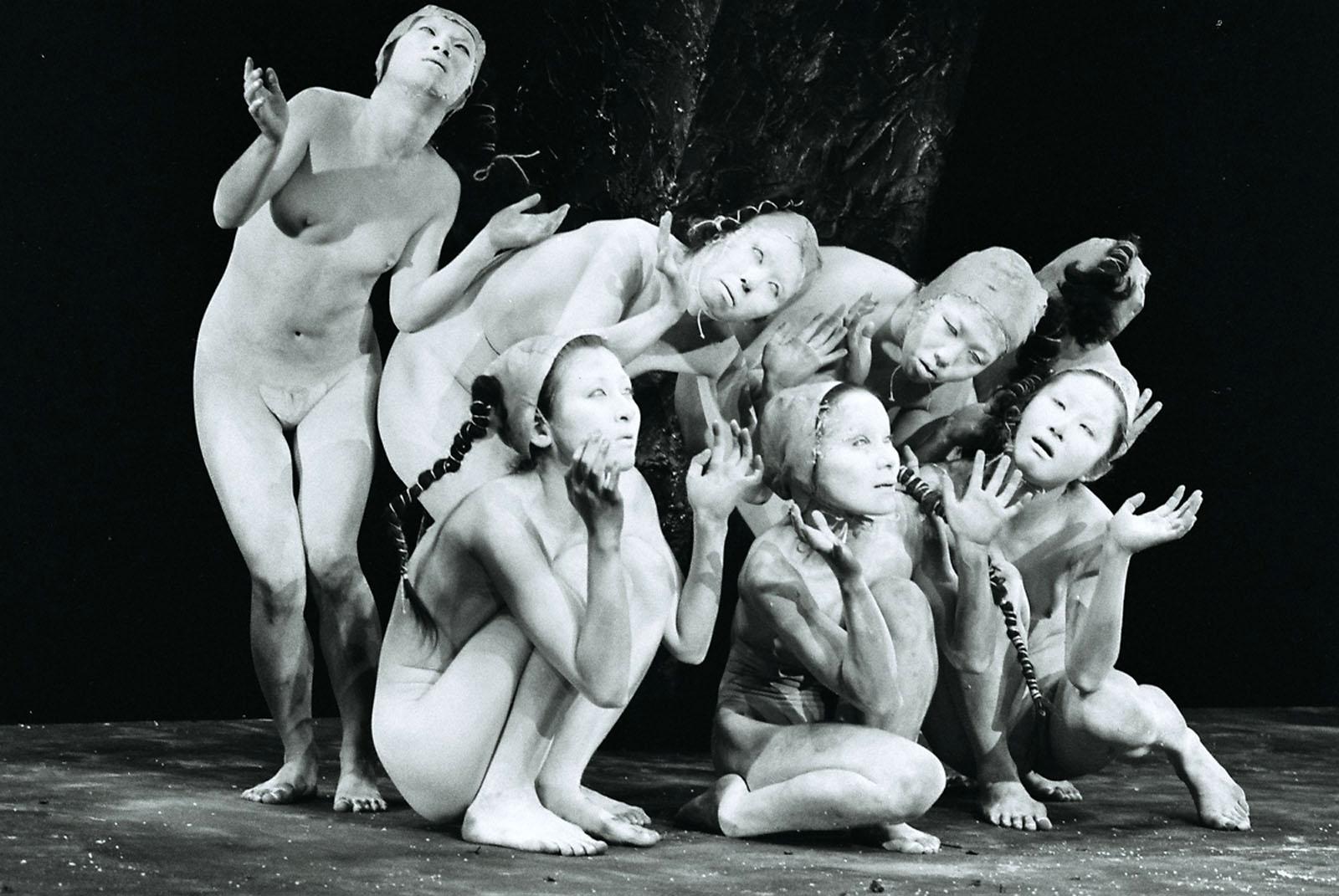 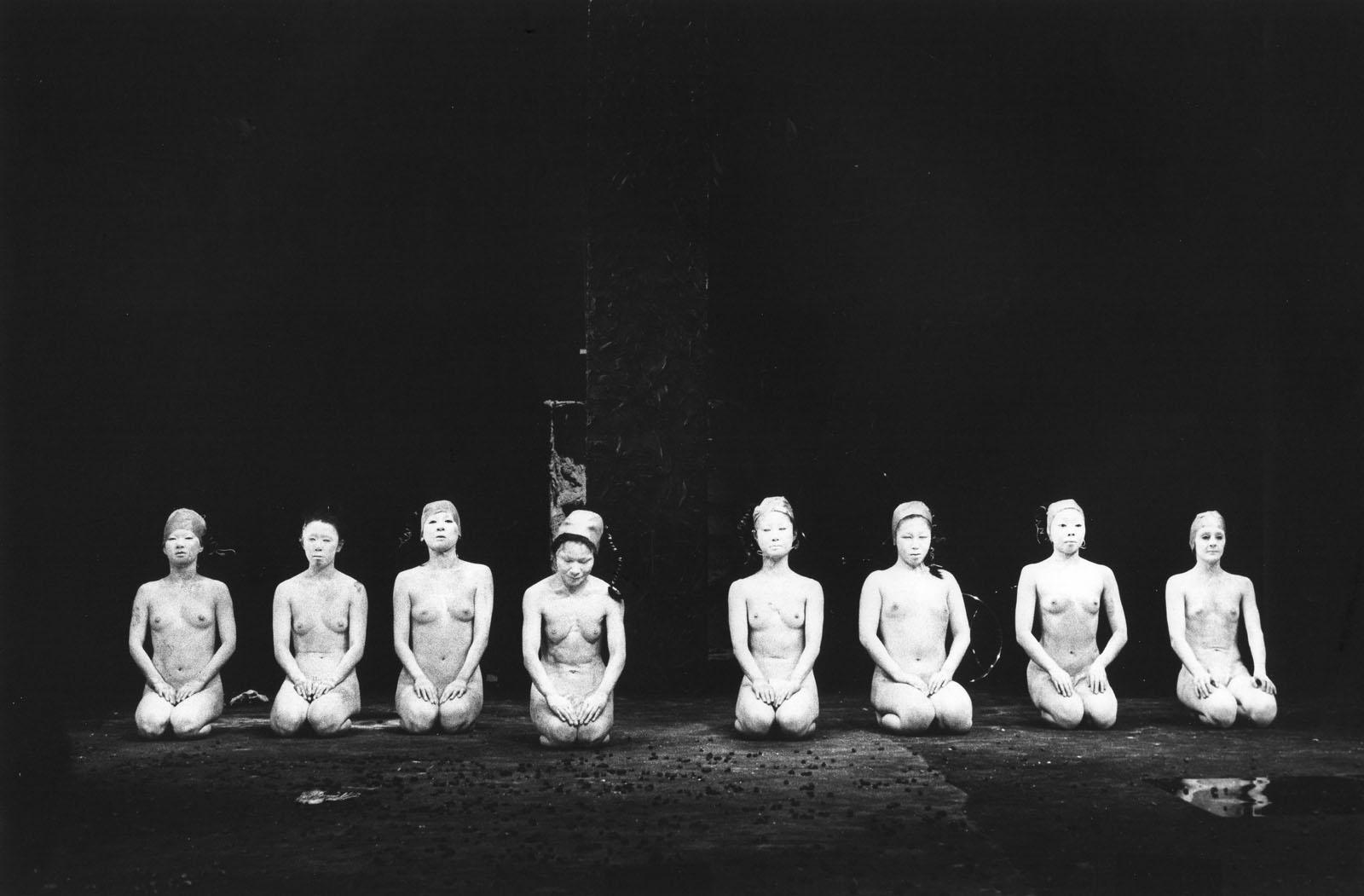 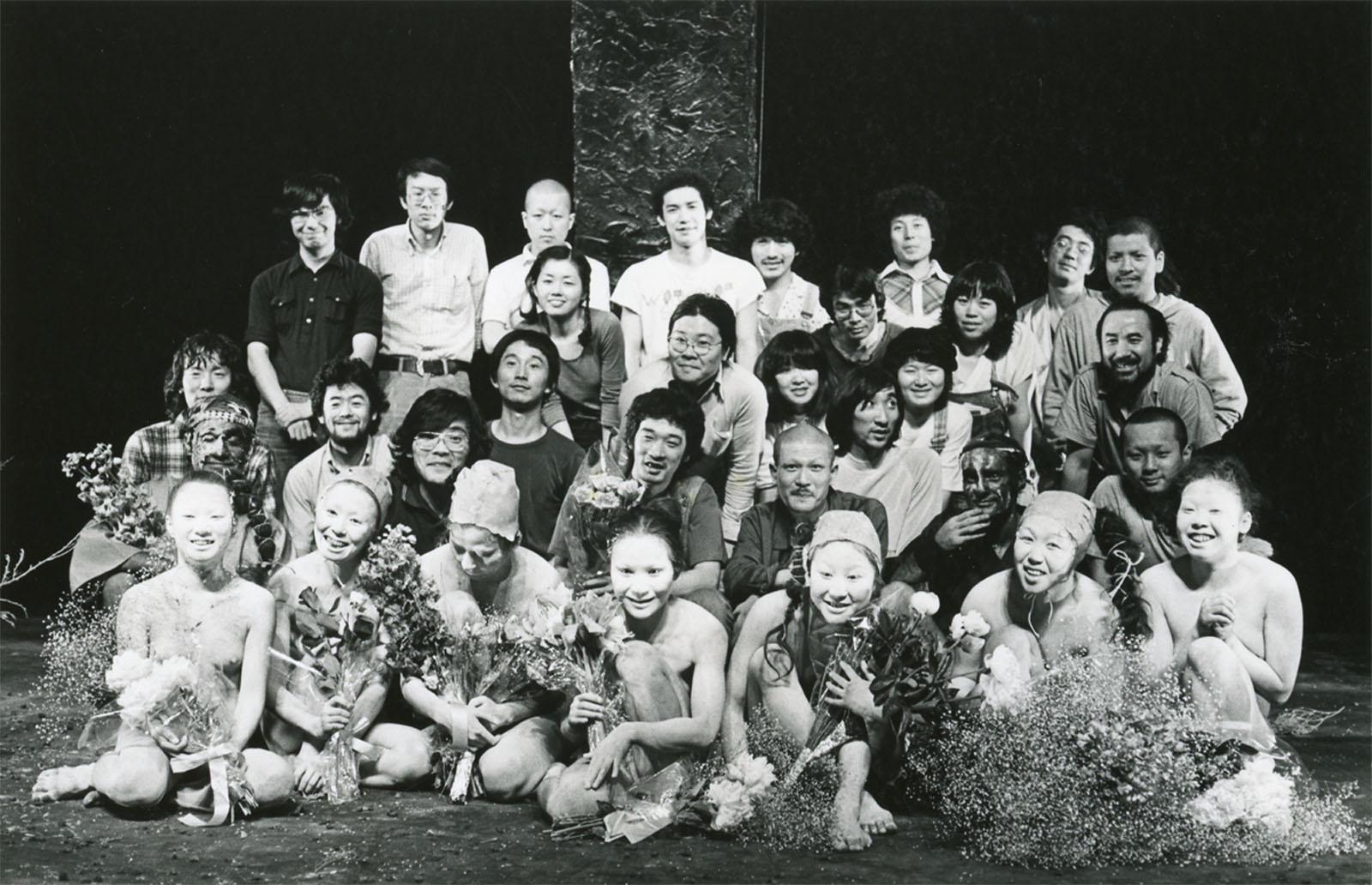