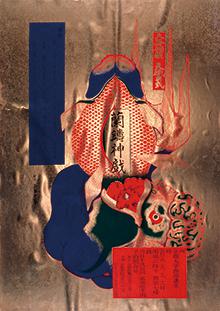 For example, you turn the handle of an all-too-familiar wooden lottery box that’s somewhere between that of a hexagon and an octagon on a shopping street, the kind where the marble comes clattering out and you get a prize based on the color of the marble. That is reproduced on stage, and with each rotation, the Butoh dancers continue to fall and so on. Indeed it was a festival filled with the pretense very typical of Dairakudakan, but for Murobushi who was not satisfied with just the activities of Dairakudakan, it was in this year that he began to solidify his intention of becoming independent.

Maro allowed the branching out of Dairakudakan. It was a little like the yakuza, but the terms were to let in one-third. [omitted] There was definitely the intent to step away from the center that was Fukui, Tohoku, and Tokyo. To step away from the center was the universal trend. If it were a theatre festival in Europe, it would be stepping away from Paris. There was that kind of a mood in art in general, including the hippie movement. It was, so to speak, post-modernism, but slightly before that was Peter Brook and such--the mixing of cultural anthropology. It was a mixture. It wasn’t just one form of theatre, but a rendezvous of different languages. Creating a mixture such as having men of African descent to act in Shakespeare. Just being in one category was unsophisticated, and there were more crossovers = hybrids. That kind of thing was in fashion. I think my ‘Miira’ was like that, too. Digging into the origins of Japanese, whether it was Indian philosophy or Buddhist sutras, behind that was something that penetrated the Japanese language. That is the monastary that connects to the body = becoming something like a fresco. Both Yamabushi and Buddhist enlightenment were brought from somewhere by Kukai. In other words, it is something made into a mixture by something in some language from Kukai, or India, or the Orient--a body gone astray. In the case of Hijikata’s Tohoku Kabuki, if one were to search for its roots, farmers that had strayed away from the Tohoku region would come up--but then, is that the basis? Certainly the absolute basis is not there. And if that is the case, then perhaps there is no basis at all. I am not the type to go to Fukui, leave the base, and do things properly, so I wanted to fabricate a story of digging a hole in the drifting place that is Fukui and ending up in Spain. Although, it seems the people in Fukui were wondering what in the world I was doing coming so far into the mountain recesses. Whether I had come to take their bride away. (laugh)