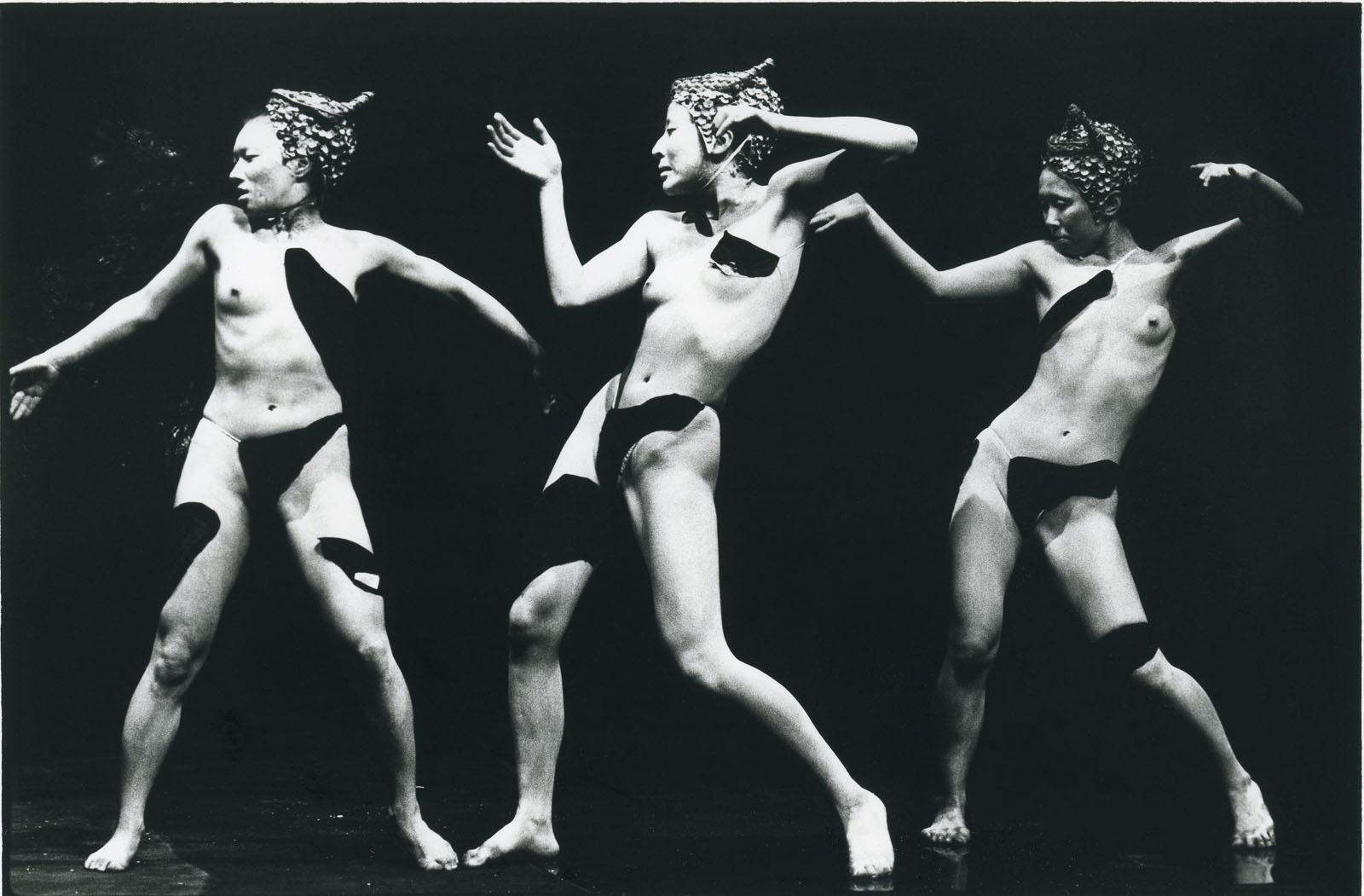 This is a spectacle based on Nietzsche’s monstrous text―something that Murobushi fell in love with and read meticulously, repeatedly referring to it, admiring it, being fascinated and intoxicated by it, and writing about it. Ariadone no kai, which had previously been choreographed jointly by the male dancers of Dairakudakan, was now completely in the hands of Murobushi alone. According to Murobushi's greeting card, this work is "both an experimental and adventurous Butoh musical and a genuine avant-garde Butoh.” “A stairway from the 20th century to the 21th century; going back 100 years, 1000 years, and engraving Nietzche’s dance philosophy book <Also sprach Zarathustra> into Butoh.” “Nietzsche: Zarathustra was a fierce love letter to the East hypothesized by Zoroaster-Duonisos. The reciprocal exchange of love letters to Western culture in modern Japan had many consequences and fruitions at the end of this century. It must have been the first attempt to do so.” And what the audience saw was a huge, leaden monolith that moved freely, a midair ride ("The Midgard Serpent”; scene titles in brackets hereafter), a flood of wheeled objects ("Ring der Ringe"), a large amount of coke pouring down ("Palace of Dreams"), a spray of blood (actually red chalk dust) when the head of a fake giant bull (Minotaur) is cut off, women in Nijinsky's heraldic garb tumbling out of a hole in the severed head (Cow Noon) with the Indian tabla, laughing witches (Witch Season), etc. ... There are many things (objects) with a strong sense of existence that go beyond the boundaries of props. From gagaku (traditional Japanese court music) to Xenakis' tape work, Brian Eno, Pink Floyd, the Flying Lizards' kitschy remake of the Brecht Song, T. Rex's Cosmic Dancer, the Pointer Sisters, Keith Jarrett's piano solo, the sound of bells, and even Satie in the finale, Gymnopédie (orchestrated by Debussy), etc.―it is a glittering mosaic of sounds from all over the world. A daring choreography that is not afraid of vulgarity and turns invisible texts into visible ones.” A large baroque work that looks like a toy box turned upside down. The fact that all of Murobushi's connections were mobilized, from advertising materials to props, is another reason why this is a major work. The sheer complexity and volume of the devices made the stage preparation extremely complicated, but I will always remember the masterful behind-the-scenes direction of Ushio Amagatsu, who, with the members of Sankai Juku in tow, kept a sharp eye on the entire production and the details.(Y.O)