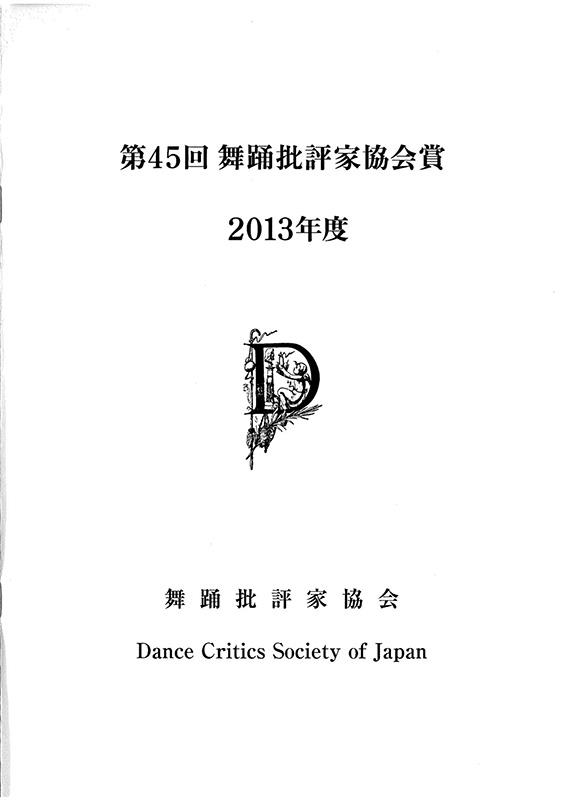 I would like to express my sincere thanks for the Dance Critics Society of Japan Award. Unfortunately, I will not be able to attend the award ceremony due to my tour in South America. I have asked Mr. Takashi Morishita (Keio University Art Center) to attend the ceremony in my place.

I am now writing this speech in Cartagena, Colombia, feeling the wind from the Caribbean Sea. I have been invited to dance my performance of “Ritornello” at the Caribbean Performing Arts Festival.

It has been forty-five years since I set foot in Tatsumi Hijikata’s Asbesto Hall for the first time and began to dance in the following year of his performance “Revolt of the Body” in 1969. My debut was in a small strip house called Kinbasya Music in Hamamatsu, Shizuoka. I vividly remember that I danced in a way that was based on poses from “L'Après-midi d'un faune,” wearing Nijinsky’s tights while receiving Kiichi Tamano’s help. The 70s rapidly passed as I produced and choreographed Dairakudakan with Maro Akaji, Butoh-ha Sebi, La saison violente, the women’s group Compaigne Ariadone, finally arriving at my first Butoh performance in Paris in 1987, “Le Dernier Eden.” Then I moved to Paris in the early 80s as a wanderer, roaming Europe.

I have been thinking of and living by moving incessantly without having a base, always existing in <the outside>, speed and super-speed, moment and eternity, body and the <crystallization of power>. And then, I was able to hold an event titled “One and A Thousand Nights of <Outside>” last year that lasted for six days, cosponsored by the city of Yokohama and the Yokohama Red Brick Warehouse.

I would like to express my deepest gratitude for the people who crossed over many genres to participate. The evaluation of “Bravely Developing A New Frontier of Butoh” does not belong to me personally, but is the result of the collective energy from these people. I promise to devote myself more and more to the exploration of the zero degree of the body, and the body of the zero degree.