The period this project will be available for has been extended.

Thanks to the positive feedback we have received, the period this project will be available for has been extended.

“Altérations / Kô Murobushi” directed by Greek-French director Basile Doganis will be distributed free of charge for a limited period of two days under the “Nijinski à minuit” project.

Basile Doganis followed Ko Murobushi with his camera for 10 years from 2006 to 2015 until Murobushi’s sudden passing. This is a documentary film in which the director tried to capture the inner nature of a solitary butoh dancer, saying, “This movie itself is a kind of dance rather than a movie about dance.” Selected for the Cinéma du reel 2019. 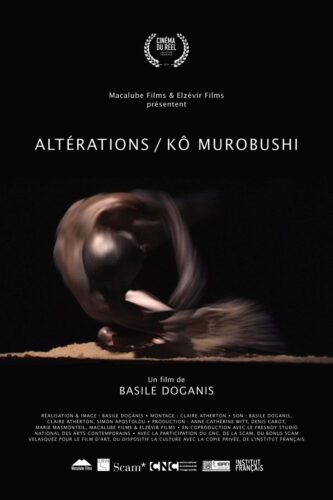 Basile Doganis is a Greek-French director-screenwriter who spent several years in Japan during his studies in Philosophy. After directing 2 fiction shorts in France, “His Brother’s Keeper” (2012) and “Citizen Day” (2014), he completed his first feature film, “Meltem,” in 2018, which was then released in France in 2019. In the same year, he concluded a 10-year-long documentary on late dancer Ko Murobushi, “Altérations / Kô Murobushi.”

Related Information : “Thousand and One Nights of ‘Outside'” Documentation

In October 2020, the Ko Murobushi Archive published a documentation of the last event produced by Ko Murobushi, “The Thousand and One Nights of ‘Outside'” (Yokohama Red Brick Warehouse, 2013). By sustaining the place of thought and dialogue that Ko Murobushi had planned, we would like to continue to explore various themes that emerge as an extension. The documentation can be viewed online. See below for details.

“The Thousand and One Nights of ‘Outside'”
https://ko-murobushi.com/activities/eng/a016

This website will deliver symposiums, dialogues, and creations that stem from Ko Murobushi’s unfinished work “Nijinski à minuit.” The lecture video and text for Symposium Part 1 will be released starting from July 18th. The dialogue for the symposium held after the postponing of this project in 2020 is available for viewing on “transit.”

This project is an attempt to physically and linguistically unravel what Murobushi thought of alongside “spasm” from themes such as “outside,” “zero degree,” and “midnight.”